One of the biggest differences between the various products is the amplifier section. The differences lie in the power and number of channels they have available. 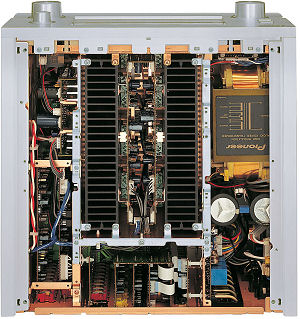 While the simplest receivers have five channel amplifiers that deliver around 50 watts has the most expensive fetal creases all 10 channels with up to 200 Watt output and using seperate solutions can go for even more powerful amplifiers. What you need in her own home depends greatest degree of which speakers to use with the equipment and the room where you have your home theater. Eg, a satellite system with small speakers and active sub generally require far less than large speakers.

There are different types of amplifier technologies used in home theater amplifiers and power amplifiers. Essentially it is a Class B which is the traditional technology and it is class D is often called digital amplifiers based on that they work with pulses reminiscent binary values. Class D is more complex to get to, but the benefit is far greater efficiency that makes you need less cooling and can thus build more powerful amplifiers in the same enclosure. Efficiency of class B are typically 50% (ie 50% of the power consumer goes to the speakers, the rest being heat), while Class D is often around 90% efficiency. 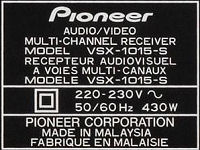 Amplifier Power and stated power consumption
Harman / Kardon is one of the largest manufacturers in the market when it comes hjemmekinoreceivere. They use actively in their marketing that one should check the stated power consumption on the back of the amplifier to see what it really performs. They claim in their advertising that the physical laws dictate that competitors can not have as powerful amplifiers that they claim as they often provide a greater effect than what is stated as consumption. For physical fact is that it is impossible that any amplifier can provide more power than what the consumer of today.

Hjemmekino.no agree that an amplifier can not provide more power than what is the pull of the mains. With traditional structure, one usually has around 50% efficiency DVS, if it draws 100 watts so you will get about 50 watts out of the speakers and the rest will become hot. What we do disagree is that one can see on the back of an amplifier how powerful it is based on available power. Because there is no standard as to what must be expressed at the rear. Most provide a kind of agent consumption and this is far from what eg Harman / Kardon stating what the consumer at maximum load.

Miller Audio Research is a company that makes and designs equipment to test hjemmekinoreceivere. They have conducted careful tests of several hjemmekinoreceivere to test the real performance. Results show that Harman / Kardon stating clearly the greatest power consumption also is the amplifier that provides at least. Below you can see a table with the results. Click on the links to see the tests or the specified effect. The result clearly shows that there is no correlation between stated consumption and what amplifier provides. Unfortunately, this is used as an argument of a variety merchants and retailers and we believe this type of marketing is directly misleading consumers.

Bi-amping and bridging
Since most amplifiers is 7.1 amps, while many still only 5.1 setup offers many amplifiers ability to BIAMP amplifiers so that one uses 2 channels per speaker for the front speakers.